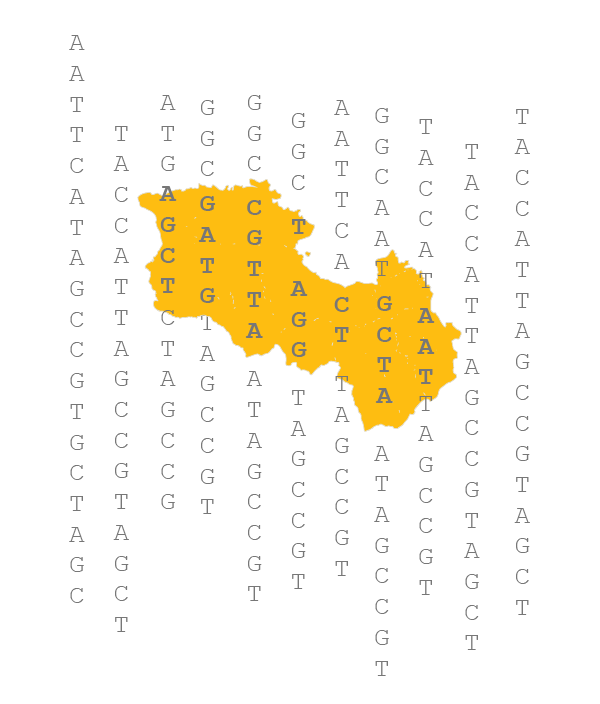 Who are we? Where did we come from? Who were our ancestors?

These questions have always been buzzing in our minds. Traditional disciplines, such as archaeology, linguistics and history help us  understand the past, but with recent advances in molecular techniques, genetics is beginning to take a leading role in gaining insights on these questions.

Our past has left footprints in our genome in the form of genetic variations (or differences in DNA sequences between individuals). Demographic events, such as population expansion, migrations and bottlenecks (dramatic reduction in population size) have resulted in altered frequencies of these variations. Every population has its own genetic history and, hence, a distinct pattern of genetic variations (not population-specific genes! ), which is transmitted through generations. And this is what the field of population genetics explores – the genetic composition of populations, and the processes that influence it.

We can trace our ancestry leveraging data of multiple genetic markers. Over the past three decades, uniparentally inherited markers, such as the mitochondrial DNA and Y chromosome, have been widely used to reconstruct matrilineal (transmitted through maternal line) and patrilineal genetic histories, respectively. However, the two genetic systems represent only a small portion of the entire genome. Thus, they lack the ability to fully characterize the overall human genetic variation.

The new era in human genetic research has ushered with the advent of large-scale genotyping and next-generation sequencing technologies (NGS). This has resulted in rapid access to thousands and millions of genetic variations across the genome. As a consequence, now we have an opportunity to get deep insights into the demographic events that have shaped current patterns of human genetic diversity. Furthermore, if until recently, our inferences on prehistoric events solely relied on modern genetic data, today, we can also incorporate direct evidence from the past. This “time capsule” is the genetic information extracted from ancient specimens. It has already revolutionized the field and has become an indispensable tool in addressing the questions on genetic history of human populations.

Armenians have a unique genetic heritage, which sets them apart from the neighboring populations. As early as around 4000 years ago, in the Bronze Age, the genetic makeup of Armenians was formed and since then has remained relatively unchanged. Investigations on patrilineal genetic legacy of Armenians have already shown that the majority of the Y-chromosomal lineages date back to the Neolithic (about 11,000–7,000 y.a). Moreover, a recent study has indicated a strong matrilineal genetic continuity between Armenians and ancient inhabitants who lived in the region at least eight thousand years ago.

Thereby, currently, the population preserves distinct features of an ancient genetic landscape in the region. This attracts a keen scientific interest, since studies of genetically isolated populations,  like Armenians, may not only provide us with improved insights into the past, but also with valuable information of medical relevance.

There are a lot of questions regarding the genetic history of Armenians yet to be answered. The Armenian Genome Project will grant us an opportunity to create a genetic map of historical Armenia and form a comprehensive picture of our past, hinting us on better ways to improve our future.